·         These are drugs which antagonize the receptor action of adrenaline and related drugs. They are competitive antagonists at α or β or both α and β adrenergic receptors. 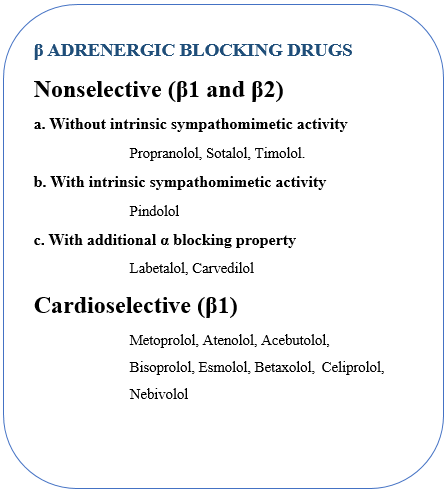 ·         Blockade of these receptors reduces the sympathetic tone of the blood vessels, resulting in decreased peripheral vascular resistance.

·         The block is irreversible and noncompetitive, and the only way the body can overcome the block is to synthesize new adrenoceptors.

·         So, this drug has been unsuccessful in maintaining in blood pressure.

·         Pheochromocytoma (a catecholamine-secreting tumor of cells derived from the adrenal medulla).

·         surgical removal of the tumor to prevent a hypertensive crisis, and it is also useful in the chronic management of inoperable tumors.

·         Raynaud disease (The fingers, toes, ears and tip of the nose are commonly involved and feel numb and cool in response to cold temperatures or stress.)

·         Frostbite (an injury caused by freezing of the skin and underlying tissues).

o   They are also used for the

·         During exercise or stress, when the sympathetic nervous system is activated, β-blockers attenuate the expected increase in heart rate. Cardiac output, workload, and oxygen consumption are decreased by blockade of β1 receptors, and these effects are useful in the treatment of angina.

·         Bronchoconstriction due to blockade of beta-2 receptors – Avoid incase of Asthma.

·         Nightmares have been reported with long-term use of relatively high doses.

·         Propranolol is as potent a local anaesthetic as lidocaine, but is not clinically used for this purpose because it causes irritation at the injected site.

·         It is subject to first-pass effect, and only about 25% of an administered dose reaches the circulation.

·         The volume of distribution of propranolol is quite large (4 L/kg), and the drug readily crosses the blood–brain barrier due to its high lipophilicity.

·         Propranolol is extensively metabolized, and most metabolites are excreted in the urine.

·         Drugs that interfere with, or inhibit, the metabolism of propranolol, such as cimetidine, fluoxetine, paroxetine, and ritonavir, may potentiate its antihypertensive effects. Conversely, those that stimulate or induce its metabolism, such as barbiturates, phenytoin, and rifampin, can decrease its effects.