·         Immunosuppressant are drugs that inhibit cellular or humoral or both types of immune responses.

·         These drugs have met a high degree of success in organ transplant and autoimmune diseases.

·         Cytokines are soluble, antigen-nonspecific signaling proteins that bind to cell surface receptors on a variety of cells.

·         Cyclosporine is a lipophilic cyclic polypeptide extracted from the soil fungus Beauveria nivea.

·         Self and foreign antigen interact between macrophage antigen presenting cell (APC) and T-helper cell in the immune response.

·         Normally, after activation through T-cell receptor, calcineurin dephosphorylates a ‘nuclear factor of activated T-cells’ (NFAT) which translocates to the nucleus and triggers transcription of cytokine genes resulting in production of IL-2 and other cytokines.

·         IL-2 diffuses out and acts on IL-2 receptor to stimulate T-cell proliferation and other processes, carrying forward the immune response. 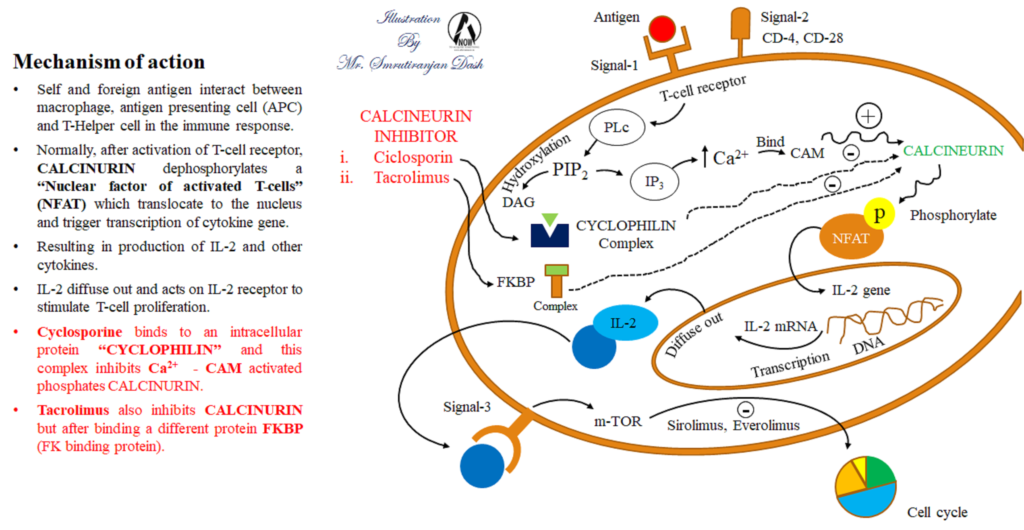 ·         Cyclosporine is used to prevent rejection of kidney, liver, and cardiac allogeneic transplants.

·         Oral absorption is variable due to metabolism by a cytochrome P450 (CYP3A4) iso-enzyme in the gastrointestinal (GI) tract and efflux by P-glycoprotein (P-gp).

·         Excretion through biliary route into the feces.

·         It is isolated from the soil fungus Streptomyces tsukubaensis.

·         Tacrolimus exerts its immunosuppressive effects in the same manner as cyclosporine, except that it binds to a different immunophilin, FKBP-12 (FK-binding protein), and the complex then binds to calcineurin.

·         Preventing heart, liver, pancreas, and kidney rejections (along with glucocorticoids).

·         Administer orally or i.v. but, as with cyclosporine oral absorption of tacrolimus is incomplete and variable

·         Tacrolimus is subject to gut metabolism by CYP3A4/5 isoenzymes and is a substrate for P-gp.

·         Absorption is decreased if the drug is taken with high-fat or high-carbohydrate meals.

·         Drugs and metabolites are primarily eliminated in the feces.

·         Cardiovascular toxicities, such as hypertension and hyperlipidemia (lower incident).

·         Other toxicities are same as cyclosporine except Hirsutism.

·         It is obtained from fermentations of the soil mold Streptomyces hygroscopicus.

·         Sirolimus binds to m-TOR (a serine/threonine kinase), interfering with signal 3.

·         Binding of sirolimus to m-TOR blocks the progression of activated T cells from the G1 to the S phase of the cell cycle.

·         Sirolimus does not lower IL-2 production but, rather, inhibits the cellular response to IL-2.

·         In combination with cyclosporine and corticosteroids – lower doses and also lower toxicity.

·         The combination of sirolimus and cyclosporine is synergistic because sirolimus works later in the immune activation cascade.

·         Sirolimus also increases the concentrations of cyclosporine, and careful blood level monitoring of both agents must be done to avoid harmful drug toxicities.

·         Another m-TOR inhibitor, is approved for use in renal transplantation. It is also indicated for second-line treatment in patients with advanced renal cell carcinoma.

·         It inhibits activation of T cells by forming a complex with FKBP-12 and subsequently blocking m-TOR.

·         Used to prevent rejection in kidney transplant recipients in combination with basiliximab, cyclosporine, and corticosteroids.

·         Rapidly absorbed, but absorption is decreased with high-fat meals.

·         An additional adverse effect noted with Everolimus is angioedema.