·         The drugs which produced action similar to that of the Acetyl choline (Ach), either by interacting with cholinergic receptor (Cholinergic antagonist) or by increasing availability of Ach at these site (Anti-cholinesterase) 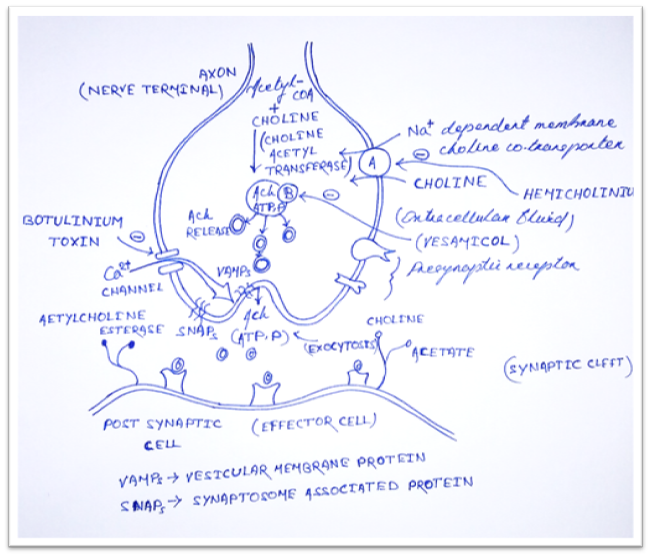 ·         Ach is synthesized in the cytoplasm from Acetyl-CoA and choline by the catalytic action of choline acetyltransferase (ChAT).

·         Acetyl-CoA is synthesized in mitochondria, which are present in large number in the nerve ending.

·         Choline is transported from the extracellular fluid into the neuron terminal by Na+ dependent membrane choline cotransporter (Carrier A).

·         Synthesized Ach is transported from cytoplasm into by anti-port (molecules moves in opposite direction) that removes proton (Carrier B).

·         Release is dependent on extracellular Ca2+ and occur when action potential (AP) reaches the terminal and trigger sufficient influx of Ca2+ ions.

·         Fusion of vesicular membrane with the terminal membrane results in exocytosis expulsion of Ach into the synaptic cleft.

·         After release: Ach molecules may bind to and activate Ach receptor (Cholino-receptor).

·         All of the Ach released will diffuse with range of acetylcholinesterase (AchE).

·         Most cholinergic synapses are richly supplied with AchE.

·         It is primarily located in autonomic effector cells in heart, eye, smooth muscles and gland of GIT and CNS.

·         Can be blocked by tubocurarine and hexamethonium

·         Activation results in a rapid increase in cellular permeability to Na+ and Ca2+ resulting depolarization and initiation of action potential.

·         This results accumulation of Ach in the synaptic cleft and provoke to bind with cholinoreceptor.

·         It is classified as short-acting or intermediate acting agents.

·         A number of synthetic organophosphorus compounds have capacity to bind covalently to AchE.

·         This result is a long lasting increase in Ach at site where it is released.

N.B:   Carbamate – Carbamylate is the active site of the enzyme.

·         Carbamylated (Reversible inhibitor) reacts with water slowly and the Esteratic site is freed and ready for action-30min (less than synthesis of fresh enzyme).

·         Phosphorylated (irreversible) reacts extremely slowly or not at all (take more time then synthesis of fresh enzyme).

·         It is stable carbamoylated intermediate with the enzyme and reversibly inactivated. 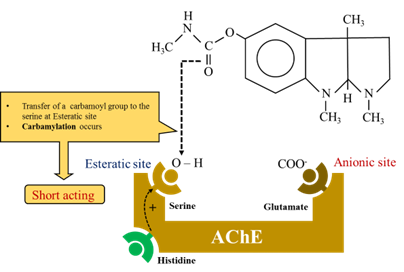 ·         Miosis or spasm of accommodation (ciliary muscle of the eye remain in a constant state).

·         Used as overdose of atropine, phenothiazine, and tricycle antidepressant.

·         Accumulation of Ach at skeletal NMJ, results in paralysis.

·         Neostigmine has quaternary nitrogen, therefore it is more polar, so is absorbed poorly from GI tract and does not enter the CNS. 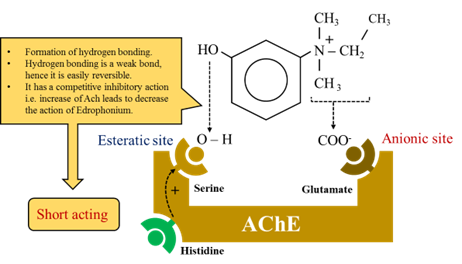 ·         Alzheimer disease: deficiency of cholinergic neurons in the CNS.

·         Development of AChEs as possible remedies for the loss of cognitive function.

·         Donepezil, Rivastigmine, Galantamine to delay the progression of Alzheimer disease.

·         It is an organophosphorus that covalently binds via its phosphate group to serine-OH group at the active site of AChE and the enzyme permanently inactive and restoration of AChE activity requires the synthesis of new enzyme molecules.

·         The phosphorylated enzyme slowly release one of its ethyl groups. The loss of an alkyl groups which is called aging. 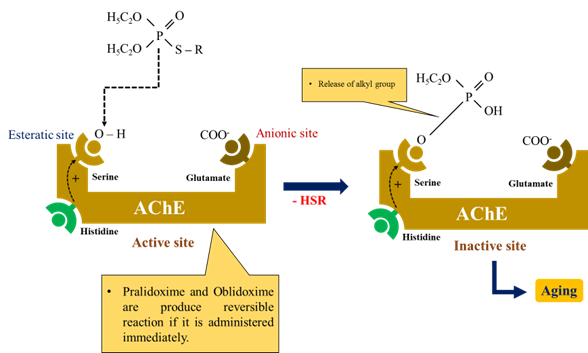