·         It is the study of biochemical and physiological effects of drug and their mechanism of action at organ level and cellular level.

·         The enhancement of the activity of specialized cells.

·         Excessive stimulation is often followed by depression of that function.

·         The use of natural metabolites, hormones or their congeners in deficiency states.

·         Only few drugs work by their simple physical or chemical properties; examples are.

o   131 I and other radioisotopes—radioactivity

·         Most drugs produce effects by interacting with a different target biomolecule, which usually is a protein.

·         Functional proteins that are targets of drug action can be grouped into four major categories i.e.

·         Almost all biological reactions are carried out under catalytic influence of enzymes;

·         Drugs can either increase or decrease the rate of enzymatically mediated reactions.

·         The selective inhibition of a particular enzyme is a common mode of drug action.

·         Such inhibition is either competitive or noncompetitive.

·         The drug is structurally similar, competing with the normal substrate for the enzyme catalytic binding site, which does not create a product or create a non-functional product.

·         Example: Organophosphates react covalently with the esteretic site of the enzyme cholinesterase

·         The inhibitor bind to the enzyme adjacent from the active site and loses the catalytic properties.

·         Ion channels are integral membrane proteins that form a pore to allow the passage of specific ions by passive diffusion.

·         Some channels are operated by signal molecules either directly or through G-Protein.

·         Drugs can also act on voltage operated and stretch sensitive channels by directly binding to the channel and affecting ion movement through it, e.g. local anaesthetics which obstruct voltage sensitive Na+ channels.

·         Many drugs are interacting with solute carrier class (SLC) of transporter protein and exert their action by directly.

·         Receptors are defined as cellular macromolecule or binding site located on the surface or inside the effector cell that serves to recognized the signal molecules or drugs.

·         Degree of complimentary co relation between drug and receptor

·         Ability of drug to produce a pharmacological response after making the drug receptor complex.

·         An agent which activates a receptor to produce an effect similar to that of the physiological signal molecule.

·         An agent which activates a receptor to produce submaximal intrinsic activity (IA between 0 and 1).

·         An agent which activates a receptor to produce an effect in the opposite direction to that of the agonist.

·         An agent which prevents the action of an agonist on a receptor or the subsequent response, but does not have any effect of its own.

·         The agonist and antagonist binds to the same site of the receptor, they are said to be “Competitive”.

·         The efficacy and repulsion depends on the concentration of the agonist and antagonist.

·         The response depends on the concentration of the antagonist.

·         Any molecule which attaches selectively to particular receptors or sites.

·         The activated α subunit carrying GTP dissociate form the other subunits and shows either activation and inhibition effects.

·         The β and γ subunits are also shows the operation of K+ channels and inhibit voltage gated Ca2+ channels.

·         The PKA phosphorylates many functional protein including troponin and phospholamban, and alter the function of several enzyme, ion channels, transporter, transcription factor and structural protein to produce;

·         The action of cAMP is terminated by the enzyme phosphodiesterase (PDEs) which hydrolyzed it to 5 – AMP. 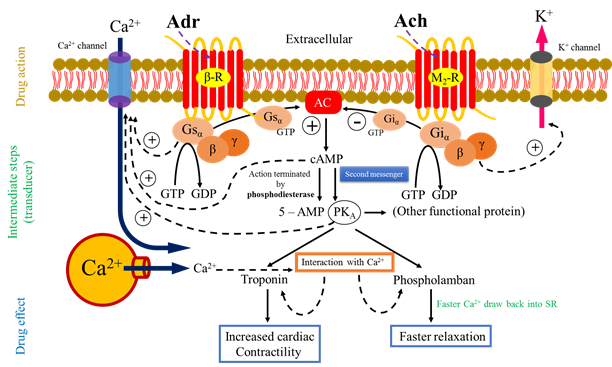 ·         The subunits β and γ are dissociates from activated α subunit. 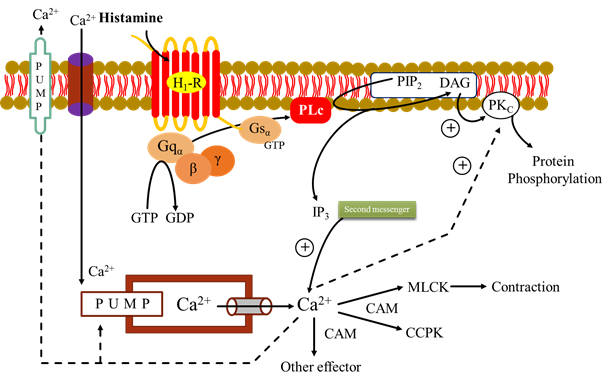 ·         The activated G – proteins (Gs, Gi, and Go) can also open or inhibit ionic channels specific for Ca2+ and K+ without the intervention of any second messenger like CAMP or IP3 and bring about hyperpolarization/depolarization/changes in intracellular Ca2+.

·         Agonist binding opens the channel and causes depolarization/hyperpolarization/changes in cytosolic ionic composition, depending on the ion that flows through.

·         The third major family of receptor consist of a protein that spans the membrane once and may form dimer or multi sub-unit complexes.

o   Insulin, and others are those have a Tyrosine kinase activity.

·         After that phosphorylation of tyrosine residue on the specific protein.

·         Tyrosine residues of the β – subunit are auto-phosphorylated. 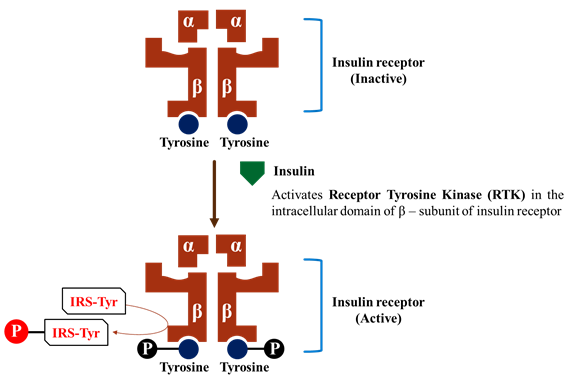 ·         The activated JAK phosphorylate tyrosine residues on the receptor which then binds another protein STAT (signal transducer and activator of transcription).

·         Tyrosine residues of STAT also get phosphorylated by JAK.

·         The phosphorylated STAT dimerize, dissociate from the receptor and move to the nucleus to regulate transcription of target genes.

·         Many cytokines, growth hormone, prolactin, interferons, etc. act through this type of receptor. 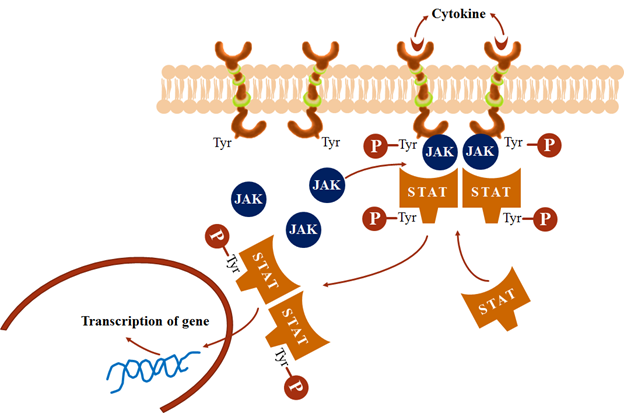 ·         These are intracellular (cytoplasmic or nucleus) soluble proteins which respond to lipid soluble chemical messenger that penetrate the cell.

·         There are two “Zinc fingers” each made up of a loop of amino acid with chelated zinc ion at DNA binding domain.

·         Binding of the steroid to GR complex proteins (HSP90) removing their inhibitory action on it.

·         Alteration of gene results promotion (or suppression) of their transcription.

·         The specific mRNA translocate the message into a specific protein synthesis, which in turn modifies cell function. 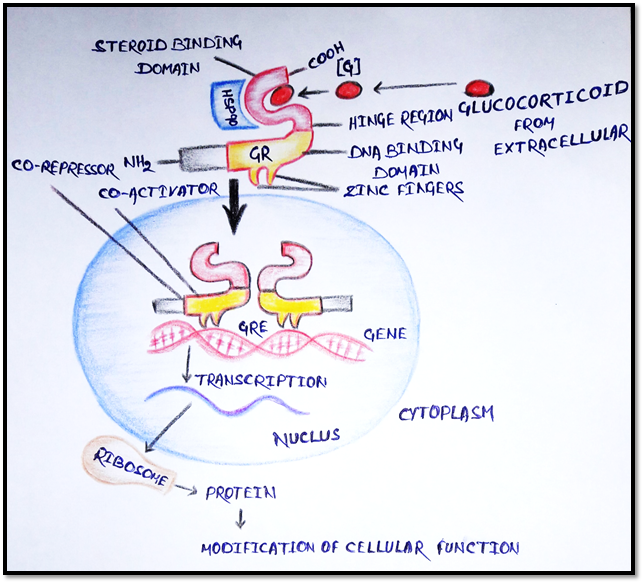 ·         The biological effect of a drug depends on its concentration at the site of action, which in turn is determined by the dose of drug administered, such a relationship is called dose-response relationship.

·         The pharmacological effect increase by increase in the concentration of drug.

·         The graded dose response means that the response is continuous.

·         The magnitude of the response against increase dose of a drug produce the graded dose-response curve, can be described as a rectangular hyperbola.

·         The concentration of drug producing an effect that is 50% of maximum is used to determine potency and is denoted as EC50.

·         It determine from graded dose-response plots is the efficacy of the drug.

·         This is the ability of a drug to elicit a response when interacts with a receptor.

·         The efficacy is depends on the number of Drug response complexes. 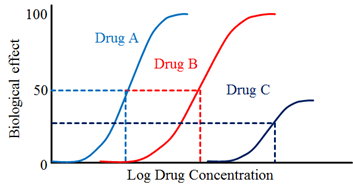 B)  Effect of drug concentration on receptor binding

·         The quantitative relationship between drug concentration and receptor occupancy applied the law of mass action to the kinetic of the binding of drug and receptor molecules.

o   Where D = the concentration of free drug.

o   Kd is used to determine the affinity of drug for its receptor.

·         Drug concentration and receptor binding can be applied to dose and response.

1.      The magnitude of the response is proportional to the amount of receptor bound or occupied.