A cardiac arrhythmia is define as abnormal electrical rhythm of the heart or abnormal impulse generation or conduction of electrical impulses responsible for membrane depolarization.

·         The cardiac cycle is normally initiated by an electrical discharge from SA node.

·         The atria and ventricles then activated sequentially as electrical depolarization passes through specialized conducting tissue.

·         The sinus node acts as a pacemaker and its intrinsic rate is regulated by the autonomic nervous system.

·   Vagal activity decrease the heart rate and sympathetic activity increase heart rate through cardiac sympathetic nerves and circulating catecholamine (it is produce by adrenal glands, location top of the kidneys).

a)      Early after depolarization (EAD): EADs are frequently associated with long Q-T interval due to slow depolarization and markedly prolonged action potentials Aps.

b)      Delay after depolarization (DAD): due to Ca2+ overload, a second deflection occur which may reach the threshold potential and premature action potential.

·         The tachycardia is initiated by an ectopic beat and sustain by a re-entry circuit. Most tachyarrhythmia are caused by re-entry.

·         A premature impulse, temporarily blocked in one direction by refractory tissue, makes one way transit around an obstacle (natural orifices in the heart, A-V nodal region).

·         This types of reentry is often responsible for PSVT, atrial flutter and atrioventricular reciprocal rhythm in Wolff-Parkinson-white syndrome (WPW).

·         In sinus rhythm, each impulse passes down both pathway before entering a common distal pathway.

·         ‘B’ pathway recover while the premature impulse travelling selectively down pathway ‘A’. The impulse travel retrogradely up pathway B, setting up a close loop or re-entry circuit.

·          This may initiate a tachycardia that continues until the circuit is interrupted by a change in conduction rates or electrical depolarization.

·         An impulse generated early in diastole gets conducted irregularly over the atrium (i.e. move rapidly through fibres with short ERP).

·         Sinus arrhythmia does not required treatment, it occurs due to cyclical alteration of heart rate during respiration.

·         This may commonly finding in athletes and people at rest.

·         It occurs due to sympathetic activity with exercise, emotion, stress, and pregnancy, some pathological causes are:

·         The QRS complex in VES (Ventricular extra-systoles) is abnormal and broader in shape.

·         For controlling the ventricular rate digoxin, β-blockers, or verapamil is may be used.

·         β-blockers or Amiodarone can be used to prevent recurrent episodes of atrial flutter.

·         Catheter ablation (it is a procedure used to terminate false electrical pathway) is highly effective against AFI. 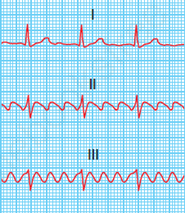 (AFI waves are visible in II and III lead)

·         VT is a run of 4 or more consecutive ventricular extra systoles, it may be sustained or non-sustained arrhythmia.

·         Synchronized DC cardioversion is the treatment of choice if systolic BP is less than 90mmHg.

·         If arrhythmia is well tolerated, IV amiodarone may be given as a bolus, followed by a continuous infusion.

·         IV lidocaine can be used but, may depress the left ventricular function, causing hypotension or heart failure.

·         Hypokalemia, hypomagnesaemia, acidosis and hypoxia should be correlated.

·         Class Ic should not be used, it depress the myocardial function.

·         Atrial fibres are activated asynchronously at a rate of about 350-550/min (due to electrophysiological inhomogenicity of atrial fibres).

·         When AF complicates an acute illness such as a chest infection or pulmonary embolism occurs.

·         Paroxysmal atrial fibrillation: β-blockers are used as first line therapy. Class Ic drugs, such as propafenone or flecainide are also effective at preventing episodes, but should not give to CAD or left ventricular dysfunction.

·         Class III drug also useful, in case it is fail, Dronedarone is an effective alternative, but sometimes it produce contraindicate.

·         Also consider catheter ablation, if drugs are not respond.

·         Rhythm control: Electrical DC cardioversion (sending the electrical shock through electrode to restore normal rhythm) may be used, if the drugs were not responded.

·         Life threatening from polymorphic ventricular tachycardia with rapid asynchronous complex and conducting base line on ECG.

·         Grossly irregular, rapid and fractionated activation of ventricles resulting in in-coordinated contraction of its fibres with loss of pumping function. It is fatal unless reverted within 2-5min is most common cause of sudden cardiac death.

·         It is due depression of impulse conducting through the A-V node and bundle of His, mostly due to vagal influence or ischemia.

(PR interval progressively increased until P wave is not conducted)

(PR interval of conducted beat in normal but, some P wave are not conducted) 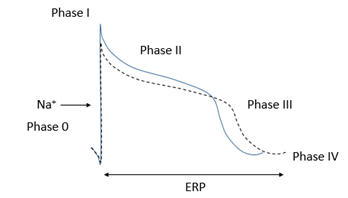 ·         Risk of torsades de pointes is increased by hypokalemia caused by diuretics.

·         It is less effective in suppressing ectopic automaticity.

·         It causes less marked depression of contractility and A-V conduction.

·         It is metabolized in liver, primarily by acetylation to N-acetyl procainamide (NAPA) which has no Na+ channel blocking property but blocks K+ channels and prolongs repolarization.

·         Same mechanism as quinidine but no α adrenergic blocking property.

·         Prolongation of P-R interval and QRS broadening are less marked.

·         It is partly metabolized in liver by dealkylation.

·         In this class of drugs rapid association and dissociation of sodium channel thus, the actions of class IB agents are manifested when the cardiac cell is depolarized or firing rapidly. 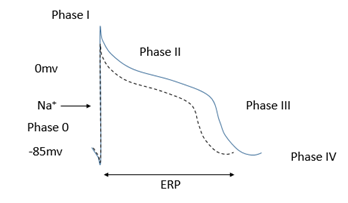 ·         Lidocaine and Mexiletine shorten phase 3 repolarization and decrease the duration of the action potential.

·         Lidocaine has extensively fast pass transformation by liver so, it is given intravenously (last only 10-20min).

·         It is hydrolysed, deethylated and conjugated; metabolites are excreted in urine.

·         The t½ of early distribution phase is 8 min while that of later elimination phase is nearly 2 hours.

·         Its t½ is prolonged in CHF, because of decrease in volume of distribution and hepatic blood flow.

·         In the emergency setting, e.g. arrhythmias following acute MI or during cardiac surgery.

·         Parenteral Mexiletine may be used in post-infarction sinister ventricular arrhythmias as alternative to lidocaine.

·         Lidocaine has wide therapeutic index and shows little impairment of left ventricular function and has no negative inotropic effect.

·         Nausea, vomiting, and dyspepsia are the most common adverse effects.

·         These are the most potent Na+ channel blockers with more prominent action on open state and the longest recovery times (> 10S).

·         Drugs of this subclass have high proarrhythmic potential when administered chronically; sudden deaths have occurred. 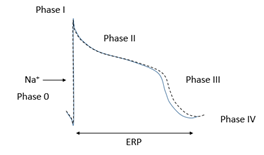 ·         This causes marked slowing of conduction in all cardiac tissue, with a minor effect on the duration of the action potential and refractoriness.

·         Automaticity is reduced by an increase in the threshold potential, rather than a decrease in slope of phase 4 depolarization.

·         Propafenone considerably depresses impulse transmission and has profound effect on His- Purkinje as well as accessory pathway conduction by blocking Na+ channel.

·         Flecainide is absorbed orally and is metabolized by CYP2D6 to multiple metabolites.

·         Propafenone is metabolized to active metabolites primarily via CYP2D6, and also by CYP1A2 and CYP3A4.

·         Flecainide and propafenone has some same adverse effect like Nausea, dizziness, blurred vision. But propafenone may also cause bronchospasm due to its β-blocking effects.

·         Propafenone is also an inhibitor of P-glycoprotein.

·         Both drugs should be used with caution with potent inhibitors of CYP2D6.

·         Flecainide has a negative inotropic effect and can aggravate chronic heart failure.

·         Propafenone is used for prophylaxis and treatment of ventricular arrhythmias, reentrant tachycardia involving AV node/accessory pathway and to maintain sinus rhythm in AF.

·         Propranolol has only mild depressant action on SA node automaticity, but marked decrease in the slope of phase-4 depolarization and automaticity occurs in SA node.

·         Used for atrial flutter and fibrillation and for AV nodal reentrant tachycardia.

·         Metoprolol is widely used in the treatment of cardiac arrhythmias. it reduces the risk of bronchospasm.

·         It is extensively metabolized in the liver primarily by

·         Esmolol is a very short acting β-blocker used for intravenous administration in acute arrhythmias that occur during surgery or emergency situations.

·         Esmolol is rapidly metabolized by esterases in red blood cells.

·         These agents prolong the duration of the action potential without altering phase 0 of depolarization or the resting membrane potential. 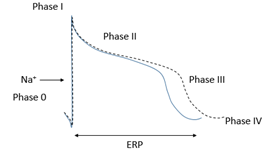 ·         Amiodarone can increase digoxin and warfarin levels by reducing their renal clearance.

·         Dronedarone is less lipophilic and is metabolized by CYP3A4 and CYP2D6; inhibitors of these iso-enzymes (Ketoconazole, erythromycin, metoprolol, etc.) markedly increase its blood levels.

·         Though it prolongs Q-T interval, risk of torsades de pointes is very low. Hypothyroidism, pulmonary fibrosis and peripheral neuropathy does not occur.

Dofetilide is a pure potassium channel blocker. It can be used as a first-line antiarrhythmic agent in patients with persistent atrial fibrillation and heart failure or in those with coronary artery disease. Because of the risk of pro-arrhythmia, dofetilide initiation is limited to the inpatient setting. The half-life of this oral drug is 10 hours. The drug is mainly excreted unchanged in the urine. Drugs that inhibit active tubular secretion are contraindicated.

Ibutilide is a potassium channel blocker that also activates the inward sodium current (mixed class III and IA action). Ibutilide is the drug of choice for chemical conversion of atrial flutter, but electrical cardioversion has supplanted its use. Ibutilide undergoes extensive first-pass metabolism and is not used orally. Because of the risk of QT prolongation and pro-arrhythmia, ibutilide initiation is limited to the inpatient setting. 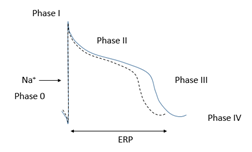 ·         Blocks the calcium channels and delay their recovery.

·         It suppresses automaticity and reentry dependent on slow channel response.

·         Verapamil has negative inotropic action due to interference with Ca2+ mediated excitation-contraction coupling in myocardium.

·         Similar to verapamil but, bradycardia and depression of cardiac contractility are less marked.

·         It is an alternative to verapamil for termination as well as prophylaxis of PSVT.

·         Digoxin inhibits the Na+/K+-ATPase pump, ultimately shortening the refractory period in atrial and ventricular myocardial cells while prolonging the effective refractory period and diminishing conduction velocity in the AV node.

·         Digoxin is used to control ventricular response rate in atrial fibrillation and flutter.

Adenosine is a naturally occurring nucleoside, but at high doses, the drug decreases conduction velocity, prolongs the refractory period, and decreases automaticity in the AV node. Intravenous adenosine is the drug of choice for abolishing acute supraventricular tachycardia. It has low toxicity but causes flushing, chest pain, and hypotension. Adenosine has an extremely short duration of action (approximately 10 to 15 seconds) due to rapid uptake by erythrocytes and endothelial cells.

Magnesium is necessary for the transport of sodium, calcium, and potassium across cell membranes. It slows the rate of SA node impulse formation and prolongs conduction time along the myocardial tissue. Intravenous magnesium sulfate is the salt used to treat arrhythmias, as oral magnesium is not effective in the setting of arrhythmia. Most notably, magnesium is the drug of choice for treating the potentially fatal arrhythmia torsades de pointes and digoxin-induced arrhythmias.

Hi….!! My name is Smrutiranjan Dash, From Odisha, India. Professionally I am a Teacher at The Pharmaceutical College, Barpali, Odisha, department of Pharmacology.